Docudays UA features the world premiere of Salt from Bonneville by Simon Mozgovy. The film tells about the desire of ordinary guys, Nazar and Maksym, to beat the world speed record on a modified Soviet motorcycle. Right after the live stream of the tête-à-tête we invite you to watch Salt from Bonneville. 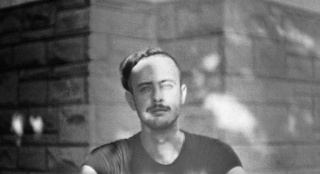 Simon (1992) is a Ukrainian filmmaker, screenwriter, film editor, producer and actor. He studied cinema and television arts at the Kharkiv State Academy of Culture. After graduating with a BA in 2013, he went on to study an advanced-level course of dramaturgy in Kyiv, where he began acting at the DAKH Theatre (2013–2018). He is the founder and co-owner of the M Films production company. Selected filmography: The Winter Garden’s Tale (2018); Salt from Bonneville (2020).