This Rain will Never Stop

The family of Andriy Suleyman, 20, moved to Ukraine when it became impossible to live in Syria. But as they tried to escape one war, they found themselves amid another: the Russian aggression in the East. Andriy becomes a Red Cross volunteer in the war zone. But after his father dies, he goes to Syria to bury him in his homeland.

Film of the DOCU/WORLD programme

The contenders in the International Competition are 7 films covering a broad geography and a wide range of various topics: from loneliness, wrestling with oneself, and to surreal reality, corruption and war. 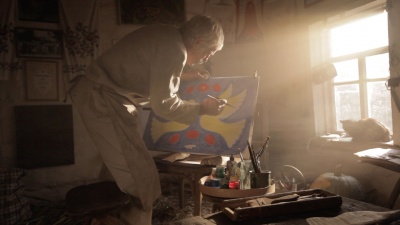 Ivan Prykhodko is a self-taught artist, one of the last folk artists in Ukraine. An invitation to the capital becomes a challenge for the master, who is used to the rural quiet.

Nazar and Maksym have upgraded a Soviet Izh-49 motorcycle in a garage in Kyiv and embarked on a trip to Utah. There, at the bottom of a dry lake, they want to break the world motorcycle speed record.

Tales of a Toy Horse

A carved wood horse becomes the protagonist of fairy tales created by Anatoliy Latiuk, a former dissident who has become a monk. In Donbas, a region engulfed by war, he is looking for stories about kindness.